On 16 April 2015, the Barossa Wine Fraternity named PETER GAGO, TYSON STELZER AND GRANT DICKSON as Barons of Barossa. The induction ceremony took place at the Barossa Grand Cellar Dinner, part of the 2015 Barossa Vintage Festival, that featured a significant tasting of more than 25 wines that were to be on the block for the Barossa Wine Chapters Auction the following day. 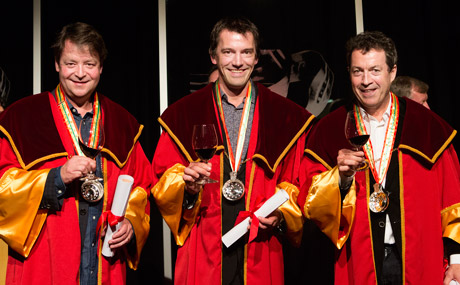 Stephen Henschke noted that these three men have made significant contributions to the Barossa's reputation as one of the world's great wine regions and have been staunch advocates throughout their careers.

Peter Gago is perhaps one of the best-Â­"known winemakers in the world. An author and in demand speaker, he travels constantly as Penfolds chief ambassador.

"I'm incredibly proud to be anointed as a Baron of Barossa - to help represent a region which continues to play a critical role in the global advancement and appreciation of South Australian wine," says Peter.

"In the footsteps of Jeffrey Penfold-Â­Hyland, Max Schubert, Dr Ray Beckwith & John Duval from the Penfolds stable, I'm delighted to be welcomed into this proud fraternity, who support and champion the very best that the Barossa has to offer."

Another global ambassador for the region, Tyson Stelzer is a highly regarded wine journalist. He wrote the Barossa Wine Traveller among a host of other books, has written for many wine magazines in Australia and overseas and has just been named the 2015 International Wine and Spirit Communicator of the Year.

He says, "œAs a 6th generation descendent of one of the early settlers of Bethany, I have always felt at home in the Barossa. Now it's official! What an honour!"

Co-Â­"owner of the highly acclaimed fermentAsian restaurant and the creator of its now iconic winelist, Grant Dickson was formerly the wholesale manager for Rockford Wines and was a force in putting Rockford and the Barossa on the best wine lists in Australia.

Grant says, "œThe Barossa's real wealth is in the depth of its great characters who, with both wisdom and vision, never give up the quest of celebrating the inherent goodness of this place, but always in a spirit of profound humility."

"œMy Vietnamese wife and I as well as her non-Â­"English speaking family have been made to feel incredibly welcome. I am so flattered and humbled that the community of Barons have asked me to become one of their number. This was an honour that I never saw coming!"